Discovered by Sir Francis Drake during his travels around the world in the 16th century, Drake Bay packs natural beauty that has stood the test of time. It is located in the northern side of the Osa Peninsula in Costa Rica, and poetically juts out in the Pacific Ocean. Seclusion, stunning vegetation and calm waves continue to describe this locale, despite its burst of tourism in recent years. If anything, the number of hotels and lodges spread throughout the area only heightens the coziness of your Costa Rican escape, where access to Corcovado National Park and many nature activities keeps the atmosphere of exploration alive.

With kilometers of clandestine beaches, spectacular lagoons and tucked-away coves, this region provides a range of family-friendly activities, including snorkeling, scuba diving, kayaking, swimming, horseback riding, sports fishing, bird watching and hiking. There’s no shortage of water fun here, where the deserted shores feel like your own. Enjoy a relaxing day on the beach or venture out on rugged hiking trails in Corcovado National Park. The coves are ideal for scuba diving, and the leafy palms fringe the coastline, making Drake Bay an ideal getaway for those seeking a quieter Costa Rican vacation.

If you’re up for a little adventure, you can catch a boat ride down the Sierpe River starting in the small town of Sierpe. For travelers, this is the most common option to get to Drake Bay. The two-hour trip down the river may even make you feel like Drake as he guided his vessel. Otherwise, to steer toward seclusion with less hassle, a small airport near the town of Drake Bay offers daily 40-minute flights to and from San Jose. Driving there is also possible, but flooding occasionally closes the roads.

One of the top attractions you won’t want to miss is Corcovado National Park. Boasting more than 39 kilometers of beaches and 13 major ecosystems – including the last old growth wet forest on the Pacific coast of Central America, this park is Costa Rica’s prize possession. It is the country’s largest national park, encompassing almost a third of the Osa Peninsula that’s home to a wealth of biodiversity. You stand a good chance at spotting some endangered species, such as jaguars, baird’s tapirs, scarlet macaws and white-lipped peccaries. Getting away could be this region’s middle name, so don’t be surprised if you only see a few other visitors in a day at the park.

Map of the Area 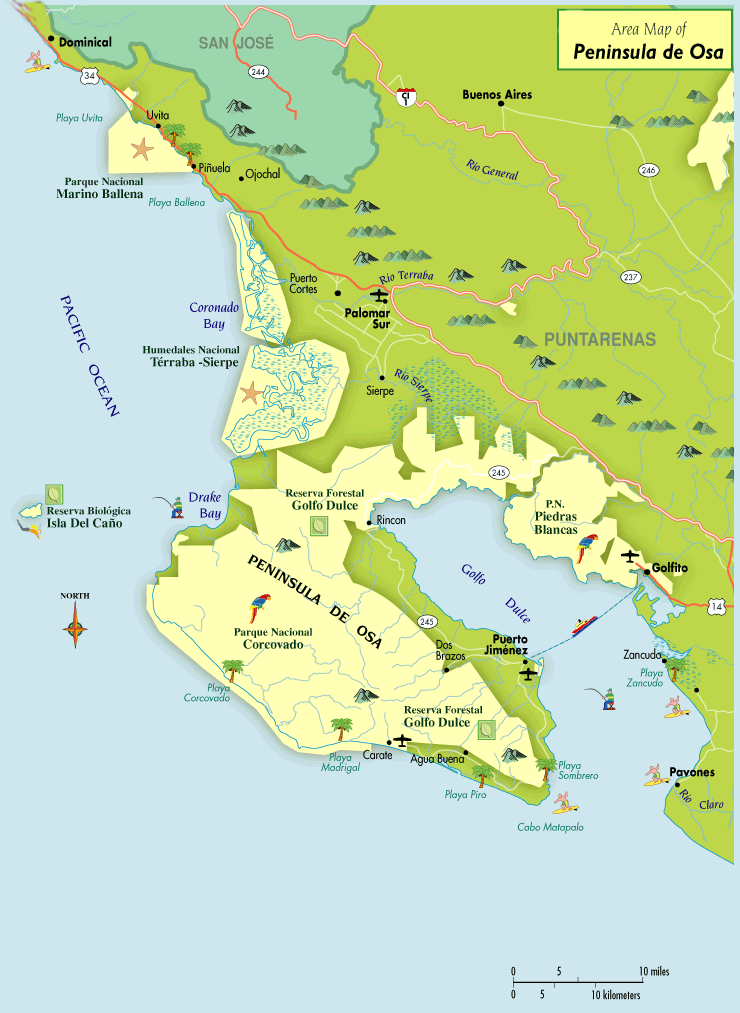 Two protected zones sit next to Corcovado National Park on the southwest of Drake. Combining rain forest trails and shimmering shorelines, Punta Río Claro National Wildlife Refuge has astounding bird watching, wildlife observation and exploration. Often, visitors catch a glimpse of exotic birds such as toucans, parrots as well as all three types of monkeys. A bit further south is the Campanario Biological Station, which features courses in ecology and community service opportunities.

Embracing a tropical climate year-round, Drake Bay is an excellent escape for active vacationers who’d rather listen to the sounds of nature than the commotion of tourist stampedes.